Kuressaare Street Festival
The morning started off with a few drops of rain but by noon it had all cleared up. Perfect timing since most events were scheduled for midday.
We set out early on to get there before the crowds. I was able to photograph the food trucks before the masses hit the streets. 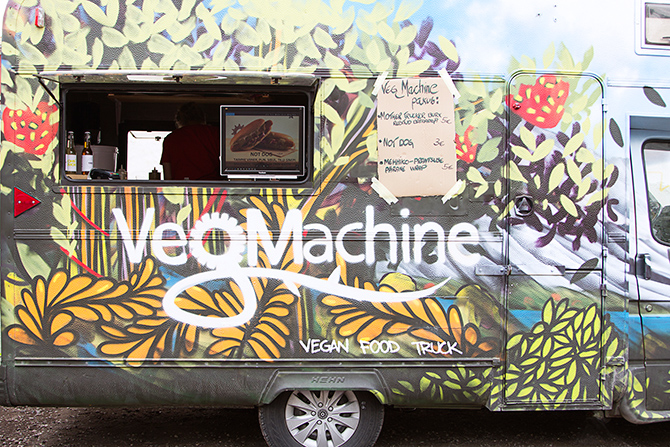 The vegan food truck was the prettiest but they seemed to have the least customers. On their menu they had - Mother trucker burger, Not dog and a Mexican-French wrap. 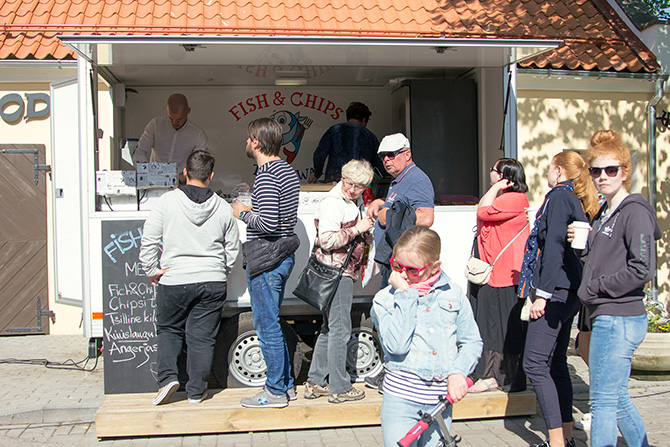 The fish and chip truck had many interesting items on the menu but they did not seem to be getting any food out. The line kept on growing but for the time we waited it did not move an inch, nor did I see anyone being served. Such a shame. 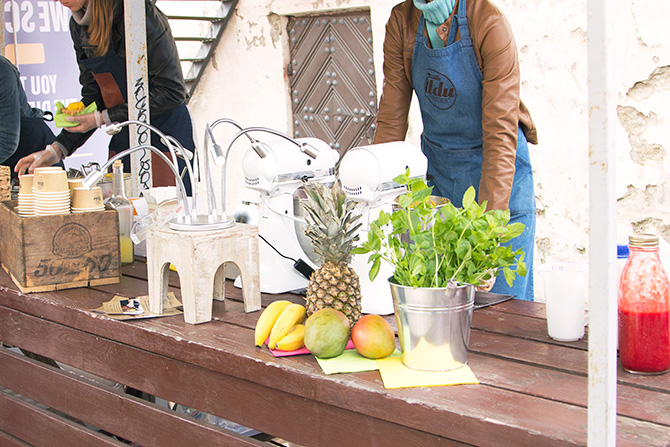 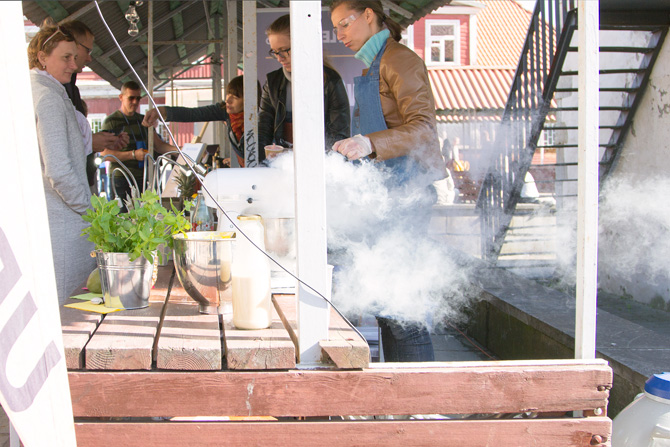 Udu ice cream was made on the spot using liquid nitrogen. I chose the creamy strawberry. Delicious. 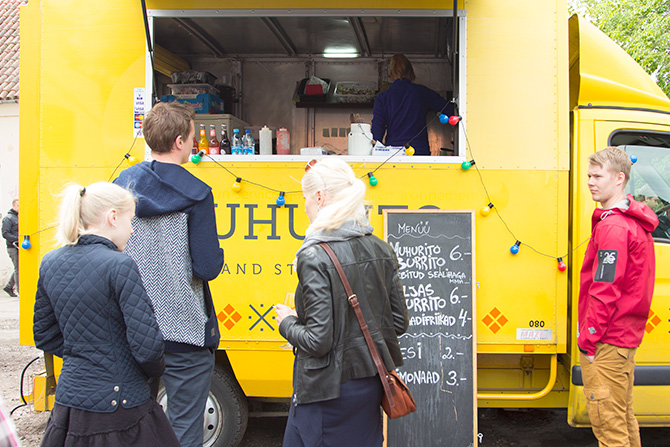 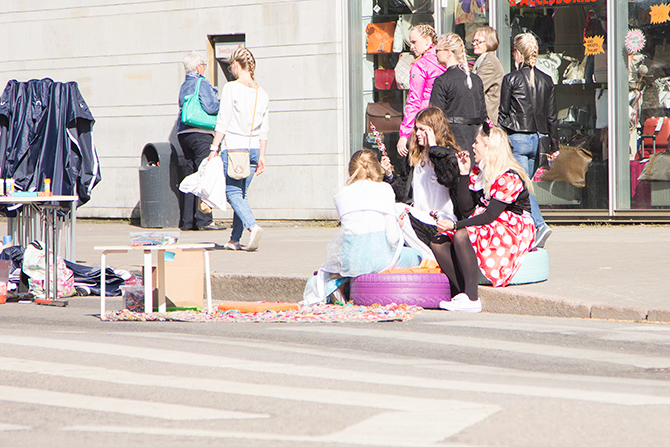 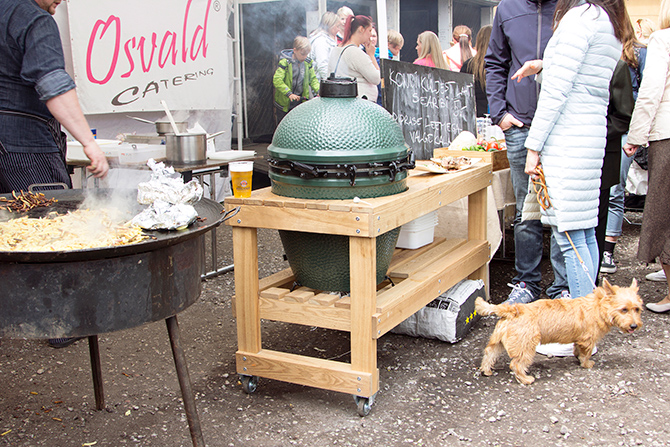 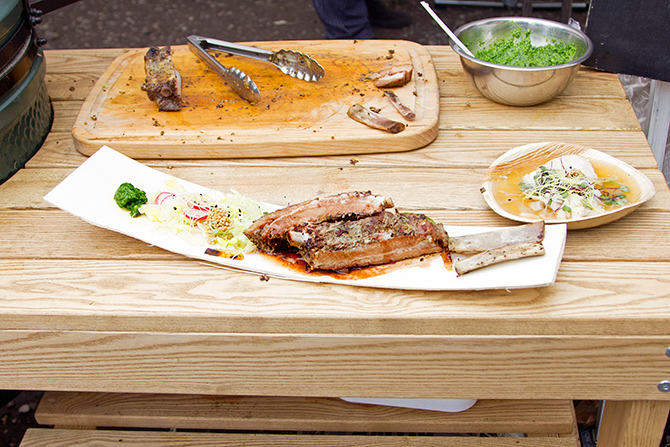 Slow cooked pork ribs with a bit of smoky flavour from the Green Egg grill. Served with salad, pickled mustard seeds, green sauce and fried chips. The ribs were awesome, easily the best food of the day, but the chips were a bit burnt. 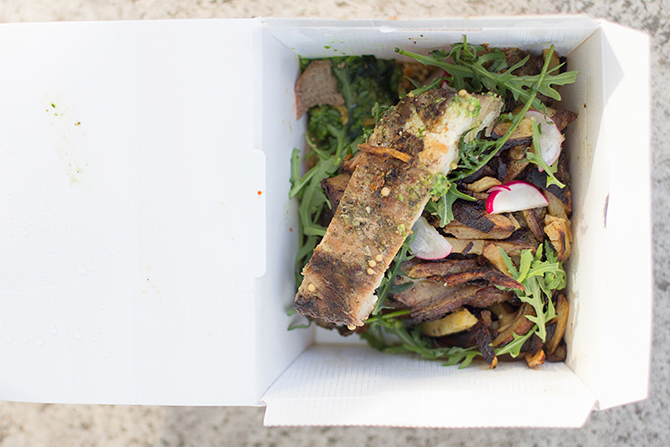 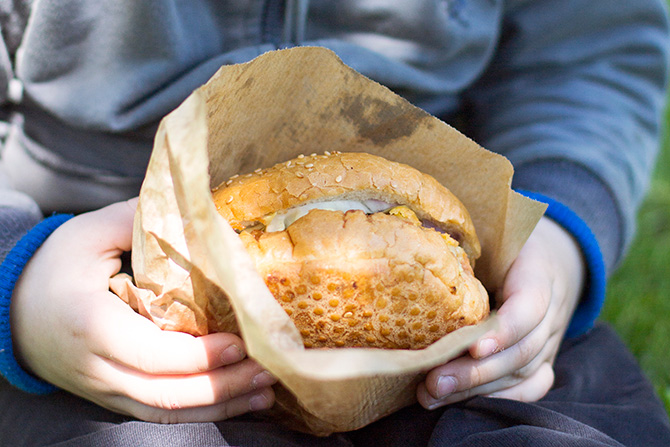 My niece with a big Derek's burger. 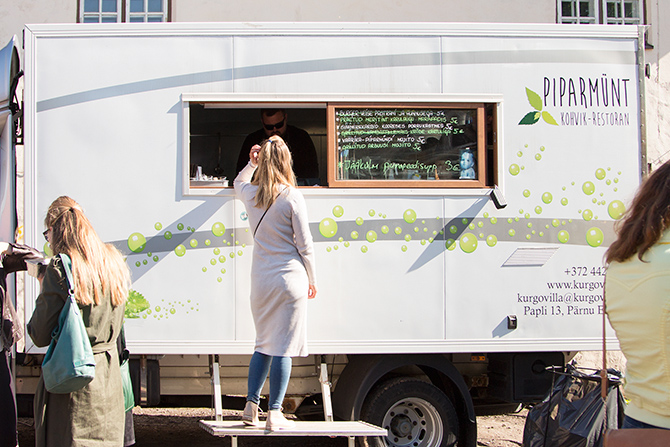 Piparmünt food truck had the longest line. On their menu - a pastrami and hummus burger, fried smelts in wild garlic marinade, mussels in creamy leek sauce, grilled lamb's liver with crispy potato threads, raspberry mojito, watermelon mojito and ice cold beetroot soup. The pastrami burger and liver sold out within hours, good thing I was there early on to get a portion of the grilled liver. Raspberry mojito was splendid as well. 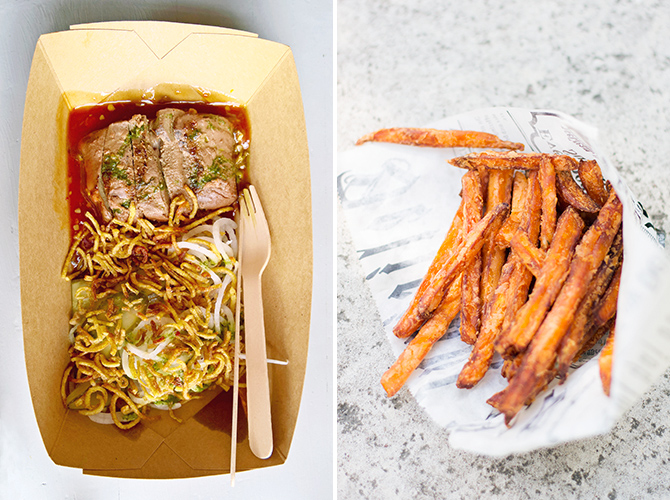 The festival included many events for big, small and the four-legged.
Izak was doing some amazing wall art.
My focus was aimed at the food court.
Again next year, hopefully.

Posted by zappie 0 comments
Email ThisBlogThis!Share to TwitterShare to FacebookShare to Pinterest
Labels: eating out, Food festival, Saaremaa
I did not intend to stay away from the blog for this long. Unfortunately I have been fighting a bad case of pneumonia since the middle of March. I am only now recovering after weeks on different antibiotics in the hospital.
It hit me completely by surprise. I was feeling a bit dizzy one day and suddenly had a 39C fever and couldn't stop coughing long enough to catch my breath. I was taken to the hospital the same day. The xray didn't show anything then but two days later my trachea felt like it was on fire and I was coughing bloody mucus. CRP was around 240 (normal is below 8), and surely, the xray then showed my whole left lung was out.

I've been home for about just over two weeks. Starting to feel like a real person now.
It does not help that it is still freezing cold and it's snowing outside!

I did not touch the camera for two months. I was a wreck. Until now. 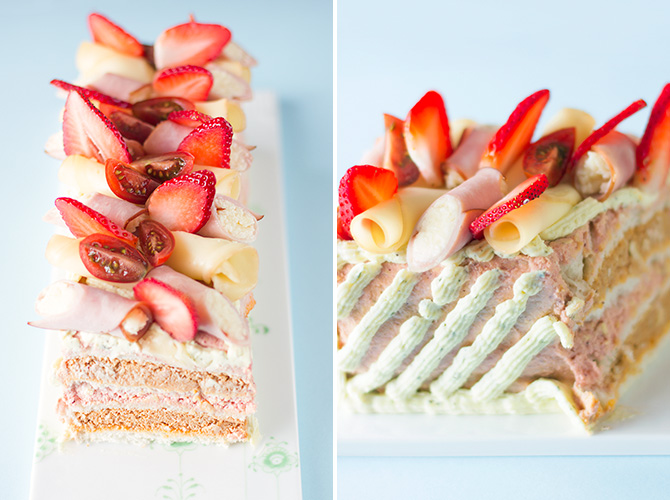 Despite everything and the limited time space I was determined to pull off another smörgåstårta for this years Easter.
It is a bit smaller than the previous ones. A slender rectangular one. 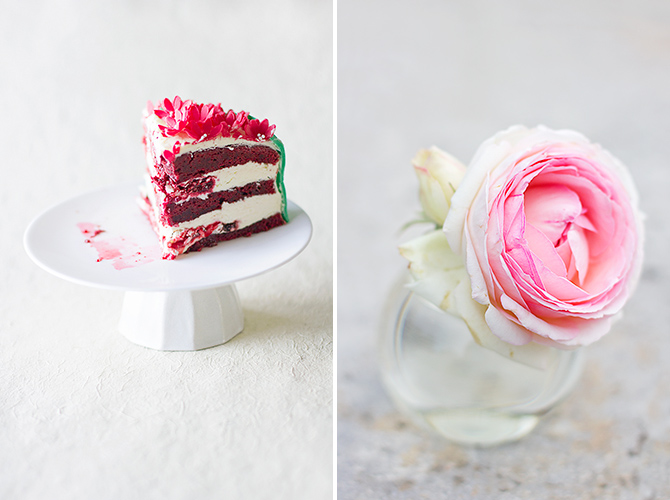 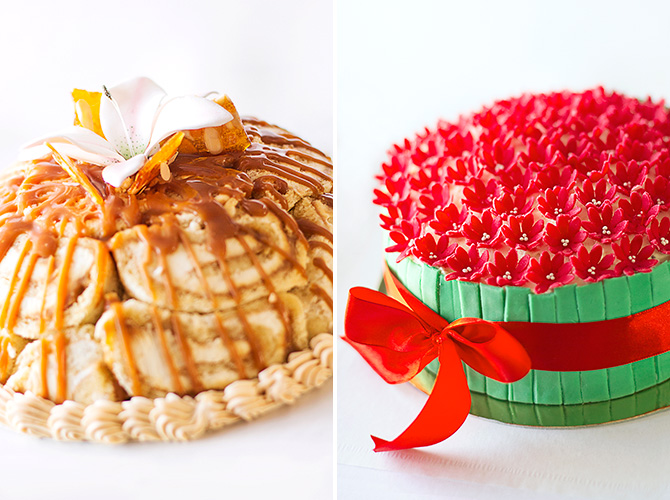 Two tortes from the cake fair at the regional training centre. Salted caramel and mocha charlotte on the left and red velvet with buttercream (and lots of it!) on the right and top left. The caramel cake became slightly disengaged after cutting into it.

I believe it's fourth time for us to purchase a cake from the event. There was a reporter from TV3 with camera crew and my little niece was caught on TV.
My favourite cake through the years was probably the pistachio orange torte from 2015 but this years salted caramel charlotte was super as well. 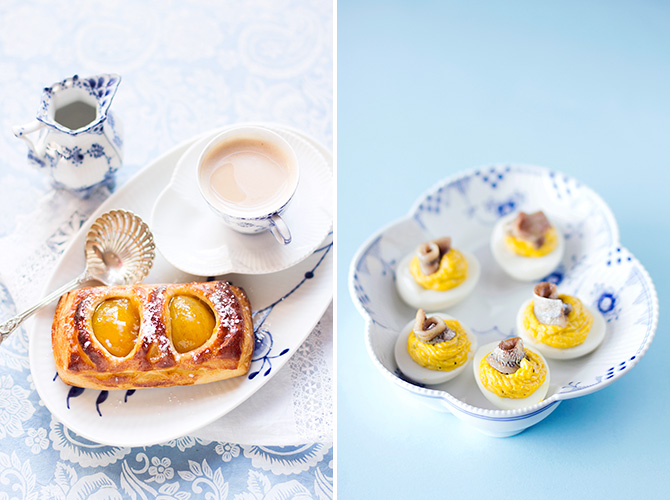 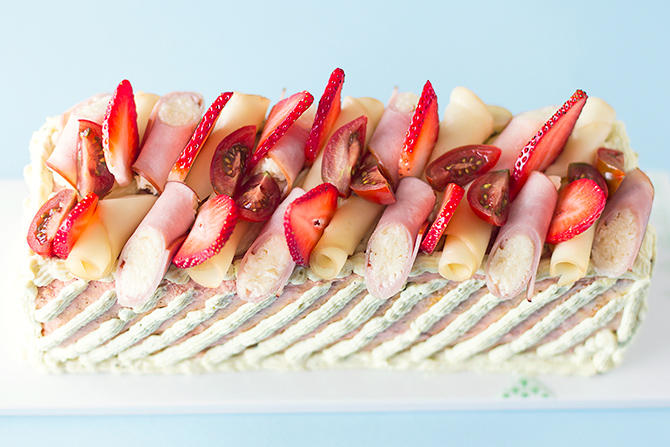 
As always, start by making the fillings.
To make the meat filling, place the rib meat, mayonnaise and broth into a food processor and process it all to a homogeneous paste. Taste to check the seasoning, flavour depends on how well the ribs were seasoned.

To make the cowberry and tomato filling, blitz tomatoes with red onion marmalade, cowberry relish and mayonnaise. Cream butter and mix it with cream cheese. Then stir

Divide the toast into piles of four slices and trim off all the crusts. Place four slices of toast in a row on a platter, one after another. Spread with a good amount of meat filling and top with another layer of toast. Now spread these with the tomato filling.
Continue to stack and spread until you run out of toast. Pile any remainder of the fillings on top and smooth it out, spreading on the sides as well.
You should have four layers of toast with interchanging layers of fillings.

Take the butter and cream cheese meant for garnishing. Cream the butter. Mix it with cream cheese and spread over the sides of the cake in a thin layer. It is to prevent it from drying.
Keep the rest of the butter mixture for garnishing, but keeping it in the fridge might make it too stiff. Garage might be a good alternative if there is no pantry.

Cover the cake with cling film and pop it in the fridge. Store overnight.

Before serving, use a pastry bag to neatly pipe the butter mixture onto the cake. Arrange ham and cheese rolls on top. I did cut them in half diagonally. Add quarters of cherry tomatoes and fresh berries. Our local shop didn't have fresh cowberries that day but they had strawberries which I then sliced and arranged on top.


Posted by zappie 0 comments
Email ThisBlogThis!Share to TwitterShare to FacebookShare to Pinterest
Labels: easter, traditional
Christmas has come and gone, together with the snow.
I baked so many biscuits and pepparkakor. For a whole month I did nothing but bake and decorate. Boy, did it take time to neatly squeeze those lines. By the end my fingers were so cramped in the "squish" position that I had to use my other hand to prize my fingers off the little squeezy bottle. But it was all joy. Unlike last year when mum dropped a baking sheet with nearly all the pepparkakor stacked on there, all decorated and cute, on the floor, shattering them to a million pieces. Only few survived. I was a bit crushed because of all the hours that I had invested. Now, when I mentioned said incident before the holidays, she claimed to have no recollection of the matter.

The anno 2016 lot of Christmas biscuits was shipped out to the world to my dearest friends well before Christmas Eve and probably has been consumed by now.

Except for this small bunch of pepperkakor that still hangs by my window. It still smells like the holidays. I will probably keep it 'til it is all dusty, it looks too sweet, I don't want to break it. I'd rather just keep it until it becomes icky and then just throw it in the bin. 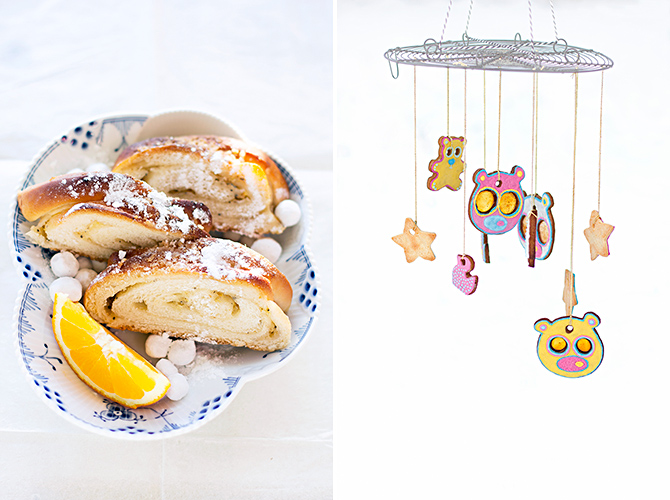 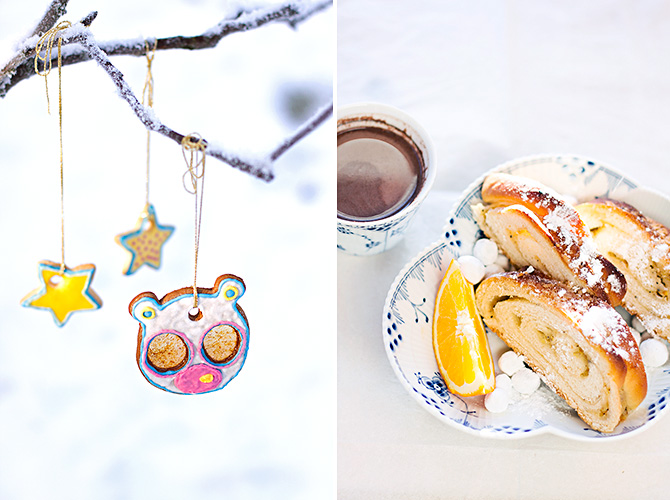 Orange and cardamom kringel, so so good! I think I ate half of it just by myself! 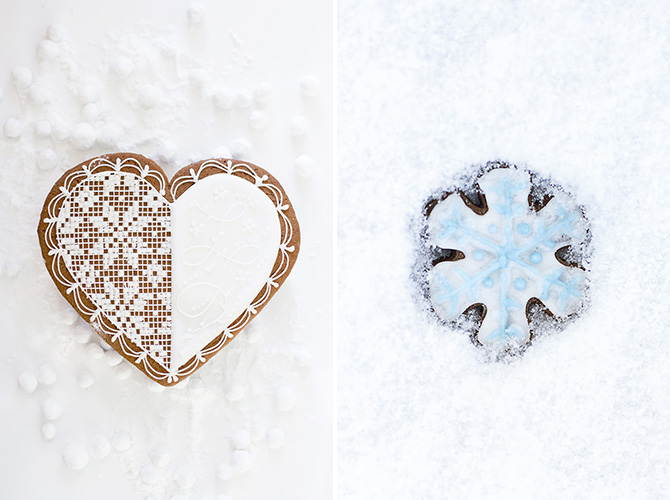 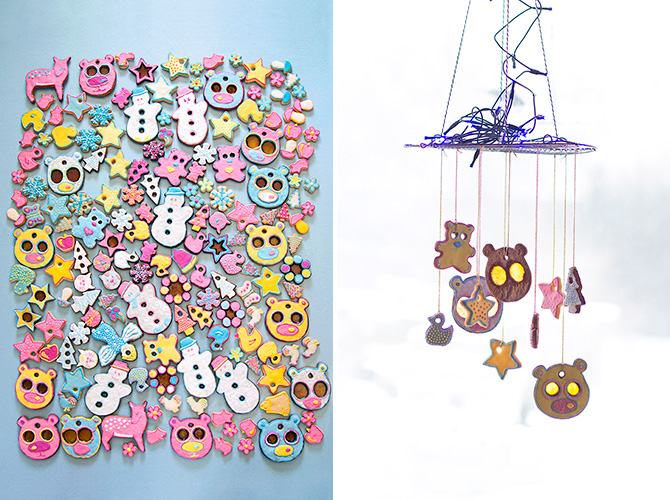 Besides all the gingerbreads and butter biscuits I also made florentines, just as on previous occasions, using my own recipe which can be found here. About two dozens of extra fat and large ones. I love them.
Posted by zappie 2 comments
Email ThisBlogThis!Share to TwitterShare to FacebookShare to Pinterest
Labels: traditional
Older Posts Home
Subscribe to: Posts (Atom)